The monastery is currently inactive.The fortress played a major role in protecting the north-western regions of Armenia (Gugark) and is among the most well preserved of all in modern Armenia.The main church at the compound is famous for its highly artistic frescoes, which cover the inside walls, the partitions, and the bearings of the building. The modern name of Akhtala was first recorded in a royal decree of 1438. The etymology of the name Akhtala is believed to be of Turkic origin, meaning white glade.[4] The original Armenian name of the settlement where the monastery is built is Pghindzahank, which means copper mine. Between 1887 and 1889 the French archaeologist Jacques de Morgan discovered 576 rectangular stone sepulchers, along with cultural items made of clay, bronze and iron near Akhtala dating back to the 8th century BC.The settlement of modern Akhtala was known as Agarak in the 5th century. The fortress was almost certainly built on top of Bronze and Iron Age foundations.[3] It was built in the late tenth century by the Kyurikids, this branch of the Bagratunis originated from Gurgen (the name was pronounced Kyurikeh in the local dialect of Gugark). He was the son of the patrons of Sanahinand Haghpat monasteries located not far from Akhtala, King Ashot III the Merciful and Queen Khosrovanush. Gurgen's brothers were King Smbat II the Conqueror and Gagik I Bagratuni, under whom the Bagratuni Kingdom of Armenia reached the peak of its prosperity. 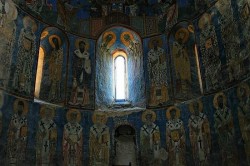