It is commonly believed that the name of Aparan is derived from the Armenian word of Aparank; meaning a royal palace. However, throughout the history, the town was known with different names including Kasagh, Paraznavert, Abaran and Abaran Verin. Later, it was known as Bash Aparan until 1935, when the name was finally changed to Aparan. 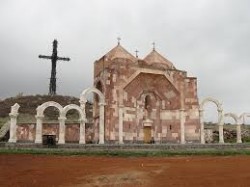