In 2007, an Armenian-Irish team decided to do test excavations in the cave site of Areni 1. Two test trenches in the front and rear galleries revealed Chalcolithic Age and Early Bronze Age layers dating back to 5000-4000 BCE. Excavations during 2007-2008 uncovered 3 pot burials in the rear chamber of the cave. Each pot contained a Copper Age human skull with no associated grave goods. All skulls belong to sub-adults of 9–16 years of age. These are currently being analyzed by the team's biological anthropologist. Remarkably, one skull contained a piece of a well-preserved brain tissue. This is the oldest known human brain from the Old World.

The cave has also offered surprising new insights into the origins of modern civilizations, such as evidence of a wine-making enterprise and an array of culturally diverse pottery. Excavations also yielded an extensive array of Copper Age artifacts dating to between 4,200 and 3,900 BCE. The new discoveries within the cave move early bronze-age cultural activity in Armenia back by about 800 years. Additional discoveries at the site include metal knives, seeds from more than 30 types of fruit, remains of dozens of cereal species, rope, cloth, straw, grass, reeds and dried grapes and prunes. 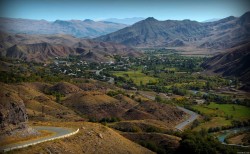