Greater Ararat is the highest peak in Turkey and the Armenian plateau with an elevation of 5,137 m (16,854 ft); while, Little Ararat's elevation is 3,896 m (12,782 ft).The Ararat massif is about 35 km (22 mi) wide at ground base.[6] The first efforts to reach Ararat's summit were made in the Middle Ages. However, it was not until 1829 when Friedrich Parrot and Khachatur Abovian, accompanied by four others, made the first recorded ascent.Despite the scholarly consensus that the "mountains of Ararat" of the Book of Genesis (8:4) do not refer specifically to Mt. Ararat, it has been widely accepted in Christianity as the resting place of Noah's Ark. It is the principal national symbol of Armenia and has been considered a sacred mountain by Armenians. It is featured prominently in Armenian literature and art and is an icon for Armenian irredentism. Along with Noah's Ark, it is depicted on the coat of arms of Armenia.Mount Ararat forms a near-quadripoint between Turkey, Armenia, Azerbaijan and Iran. Its summit is located some 16 km (10 mi) west of both the Iranian border and the border of the Nakhchivan exclave of Azerbaijan, and 32 km (20 mi) south of the Armenian border. The Turkish–Armenian–Azerbaijani and Turkish–Iranian–Azerbaijani tripoints are some 8 km apart, separated by a narrow strip of Turkish territory containing the E99 road which enters Nakhchivan at 39.6553°N 44.8034°E.From the 16th century until 1828 the range was part of the Ottoman-Persian border; Great Ararat's summit and the northern slopes, along with the eastern slopes of Little Ararat were controlled by Persia. Following the 1826–28 Russo-Persian War and the Treaty of Turkmenchay, the Persian controlled territory was ceded to the Russian Empire. Little Ararat became the point where the Turkish, Persian, and Russian imperial frontiers converged.The current international boundaries were formed throughout the 20th century. The mountain came under Turkish control during the 1920 Turkish–Armenian War. It formally became part of Turkey according to the 1921 Treaty of Moscow and Treaty of Kars.In the late 1920s, Turkey crossed the Iranian border and occupied the eastern flank of Lesser Ararat as part of its effort to quash the Kurdish Ararat rebellion,during which the Kurdish rebels used the area as a safe haven against the Turkish state.Iran eventually agreed to cede the area to Turkey in a territorial exchange.The Iran-Turkey boundary skirts east of Lesser Ararat, the lower peak of the Ararat massif.As of 2004 the mountain is open to climbers only with "military permission". The procedure to obtain the permission involves submitting a formal request to a Turkish embassy for a special "Ararat visa", and it is mandatory to hire an official guide from the Turkish Federation for Alpinism. Access is still limited, even for climbers who obtain the necessary permission, and those who venture off the approved path may be fired upon without warning. 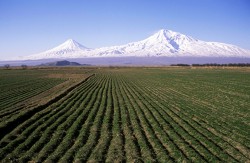