Armenian historian Stepanos Orbelian in his book 'History of Syunic' (I-XII centuries) mentioned that in Tsluk (Yevalakh) region of Armenia, near town Syunic or Sisian was a village Carunge, which means in Armenian Stone Treasure or Foundational Stones.

This interpretation is related to the fact that the stones make whistling sounds on a windy day, presumably because of multiple reach-through holes bored under different angles into the stones in prehistoric times.

The Carahunge Monument consists of the following parts: the central circle, the north arm, the south arm, N-E alley, the chord (crossing the circle) and separate standing stones.

The heights of the stones range from 0.5 to 3 m (above ground) and weight up to 10 tons. They are basalt (andesite) stones, eroded by time and covered with moss and lichen of many colours. The inside surface of holes preserved much better. There are also many broken and unnumbered stones.

About 80 of the stones feature a circular hole, although only 37 of the stones, with 47 holes, are still standing. They have been of interest to Russian and Armenian archaeoastronomerswho have suggested that the standing stones could have been used for astronomical observation. Seventeen of the stones were associated with observations of sunrise or sunset at the solstices and equinoxes, and 14 with the lunar extremes. However, this must remain conjectural as the holes are relatively unweathered and may not even be prehistoric in origin. 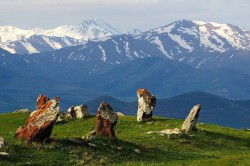