Crossing the bridge at the entrance of the village, the road continues towards the towns of Lachin and Stepanakert. New Khndzoresk (the current inhabited area) was built in the 1950s. The village is located at 1580m above sea level and occupies 6772,8ha. The National Statistical Service of the Republic of Armenia(ARMSTAT) reported its population as 2,260 in 2010, up from 1,992 at the 2001 census. In the end of the 19th century Old Khndzoresk was the biggest village of Eastern Armenia. In the beginning of the 20th century the community had 8300 inhabitants (1800 households). In 1913 there were 27 shops, 3 dye-houses, tanneries, 7 schools. The village is famous for taking part in the liberation movement of David Bek. The fortress of Khndzoresk served as a military base for Mkhitar Sparapet in 1728-1730. In 1735 the village was visited by Catholicos (Head of Armenian Apostolic Church) Abraham Kretatsi who gave a thorough description of the community in his chronicles. During the 1980s, an additional village sprouted 7km from Khndzoresk due to resizing and political unrest. This village, considerably smaller than Khndzoresk, is called Lower Khndzoresk, or Nerkin Khndzoresk. 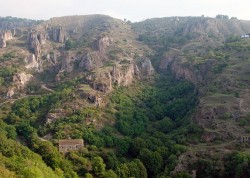