The earliest mention of the term matenadaran, which means "repository of manuscripts" in Armenian, was recorded in the writings of the fifth century A.D. historian Ghazar Parpetsi, who noted the existence of such a repository at Etchmiadzin Cathedral, where Greek and Armenian language texts were kept. After that, however, the sources remain largely silent on its status.

Thousands of manuscripts in Armenia were destroyed over the course of the tenth to fifteenth centuries during the Turkic-Mongol invasions. According to the medieval Armenian historian Stepanos Orbelian, the Seljuk Turks were responsible for the burning of over 10,000 Armenian manuscripts in Baghaberd in 1170. In 1441, the matenadaran in Sis, the capital of the former Cilician Kingdom of Armenia, was moved to Etchmiadzin and other nearby monasteries. As a result of Armenia being a constant battleground between two major powers, the Matenadaran in Etchmiadzin was pillaged several times, the last of which took place in 1804.

Eastern Armenia's incorporation into the Russian Empire in the first third of the nineteenth century provided a more stable climate for the preservation of the remaining manuscripts. Thus, "a new era started for the Etchmiadzin Matenadaran. The Armenian cultural workers procured new manuscripts and put them in order with more confidence." Whereas in 1828 the curators of the Matenadaran catalogued a collection of only 1,809 manuscripts, in 1914 the collection had increased to 4,660 manuscripts. At the outbreak of World War I, all the manuscripts were sent to Moscow for safekeeping and were kept there for the duration of the war. 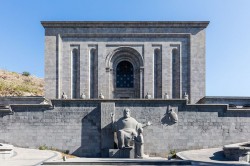