The capital and largest city of the province is the town of Ijevan. The name of the province is derived form Tavush; a variant of the original name of Tuchkatak canton of the historic Utik province of Ancient Armenia. It first appeared during the 9th century as the name of the 9th-century Bagratid fortress near modern-day Berd.After the invasion of Turkic tribes during the 11th century, the name of Tavush was Turkified as Tovuz.

Tavush has an area of 2,704 km² (9% of total area of Armenia). It occupies the northeastern part of the Republic of Armenia. It is bordered by Georgia from the north and Azerbaijan from the east. Domestically, it is bordered by the Gegharkunik Province from the south, Kotayk Province from the southwest and Lori Province from west. The territory is mainly mountainous and rocky hillsides covered with a green carpet of Alpine meadows. Tavush is sometimes referred to as a little Armenian Switzerland. The average height of the region is around 900 meters above sea level.Based on the historical divisions of Ancient Armenia, the current territory of the province occupies parts of the Varazhnunik canton of Ayrarat province, the Dzorapor and Koghbapor cantons of Gugark province, and the  Aghve and Tuchkatak (Tavush) cantons of Utik province.The province entirely lies among the mountains of the Lesser Caucasus. It is surrounded by the Miapor mountains from the east, the Somkheti mountains from the north, the Gugark mountains from the east and the Kenats mountains from the south. The highets point of Tavush is the Miapor peak with a height of 2993 meteres, while the lowest point is located at a height of 380 meters in the Debed river valley near the village of Debedavan.The province is a major source of water in Armenia. The main source is Aghstev river with its tributaries Getik, Voskepar and Sarnajur. Minor rivers include Akhum, Tavush and Khndzorut.Tavush is also rich for its mountain springs, mineral water and small lakes such as the Lake Parz and Lake Gosh.Most of the Tavush territory is covered with thick forests, mainly around the towns of Dilijan, Ijevan and Berd. The province has a number of protected forests including the Dilijan National Park, Akhnabad Taxus Grove Sanctuary, Arjatkhelni Hazel Sanctuary, Gandzakar Sanctuary, Ijevan Sanctuary and Zikatar Sanctuary. 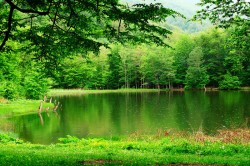