Flight to Yerevan. Arrival at Zvartnots airport. Reception and transfer to the hotel.

Discovery of the capital, green city built in pink stone at the edge of the Hrazdan river canyon, visit the Matenadaram, museum of ancient manuscripts. Excursion to Etchmiadzin, former capital of the Armenian kingdom and residence of the Catholicos. On the way back, stop at the ruins of the circular temple of Zvarnotz.

Excursion in the valley of Ararat, which used to take the Isfahan / Constantinople trade route, for the visit of the fortified monastery of Khor Virap, where St. Gregory the Illuminator was imprisoned; then the monastery of Noravank, a former episcopal see, where one admires one of the most beautiful bas-reliefs of Armenian art. Back to Yerevan.

Excursion Continue to Garni, famous for its former royal residence of the 1st century AD, and its magnificent pagan Temple of the Sun; then visit the cave monastery of Gueghard, spiritual high place of the country, dating from the early days of Christianity. Return to Yerevan and discover the Genocide Memorial on "Hill of Swallows".

Departure to the region of Guégharqounique. Visit the funeral site of Noradouz splendid "khachkars" (carved stone cross). Road to Lake Sevan, which occupies 5% of Armenian territory, with its churches of the Holy Apostles and the Mother of God. Departure to the wooded valley, where nestles the beautiful monastic complex of Haghartzine, founded in the twelfth century, then; Continue to Dilijan.

Departure to the region of Lori. Visit of the basilica of the 6th century in the village Odzoune. Discovery of the great medieval monastery of Haghpat on the steep side of a plateau. Continuation by Alaverdi to the Georgian border. Arrival in Tbilisi.

Discovery of the Georgian capital, a very old city with a picturesque setting on the steep banks of the Koura: the fortress of Narikala, the old town with narrow alleys, traditional houses, precious churches, our Lady of Sion and that of Metekhi. Visit of the Beaux-Arts museum known for its exceptional collection of metal icons and cloisonné enamels.

Departure towards Djvari, superb monastery perched on a rocky peak. Then descent to Mtskheta, which was for more than a millennium the capital of Iberia (Ancient Georgia), where we can admire the oldest churches in the country (eleventh century). Visit Ananouri Fortress which elegantly overlooks a water reserve. Continue to the small town of Stephantsminda better known as Kazbegui in the Great Caucasus Mountains.

Stephantsminda-Kazbegui at the foot of Mount Kazbek (5047m), offers a grandiose setting for mountain hikes. Quiet walk of six kilometers (about three hours) on a path leading to the church of Trinity Guergueti (2170m), through sublime landscapes. Lunch at the inhabitant to learn about Georgian cuisine.

Excursion to Gori, hometown of Stalin, where you can visit the house-museum and its armored car. Continuation towards the church of Didi Ateni and its superb frescos of the XIth century, then discovered the rocky fortress of Ouplis-Tsikhe, hollowed out in the rocks dominating the Koura, and which would go back to the second century BC. Back to Tbilisi.

Departure for Kakheti, a region in the east of the country known for its viniculture and architectural heritage. Visit the magnificent cathedral of Alaverdi (eleventh century), then discover the princely residence of Tsinandali, where lived the Georgian poet and fine connoisseur of wines Chavchavadze. Continuation to the small medieval town of Signaghi, visit of the church of Bodbe where sits Santa Nino, evangelizer of Georgia. Back to Tbilisi.

Transfer to the airport and departure. 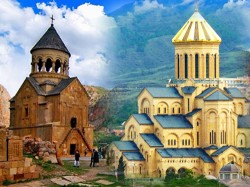