Srbanes Monastery (built in VIII-XVII centuries) which is known also as St. Hovhannes or Hovhan Odznetsi Monastery is located in Lori Province of Armenia, at the north-west edge of Ardvi village. The monastic complex is consists of two small churches and a belfry. There is a tetrahedral monument, khachkars (cross stones) and ruins of dwelling and utility structures on the territory of the monastery.

The two churches are single-nave vaulted halls. The entrance along common longitudinal wall connects them. The northern hall is smaller; it has a square prayer house and an apse like a horse shoe. Once the church had an entry from the west too, but now it is closed. In XIII century a small vaulted hall was attached from the western part of the church. The floor of the southern hall is studded with gravestones.

The churches are built of small uneven andesite stones. Only three lower ranges of the eastern wall are laid with large smooth-hewn stones.

Analysis of structural elements of the two churches shows, that they weren`t built at the same time. It`s obvious that the northern church was built earlier than the whole complex. It is supposed that the church was restored when the other structures of the monastery were built (supposedly in XVII c.).

The belfry (XVII) was erected at the southern part of the monastery. The lower tier of the belfry is cubic and it is crowned with rotunda supported by six columns.

Srbanes Monastery is surrounded by low-height walls. There is a medieval cemetery with noteworthy khachkhars and gravestones at the western part of the monastery. In XIX century the Srbanes was reconstructed by Stepanos Tarinyan, and in 1902 — by Melikset Kalantaryan.

34th Armenian Catholicos Hovhannes Odznetsi (Cath.717-728) is buried at Srbanes monastery. Prominent theologian, lawyer, thinker and reformer after his death was canonized by Armenian Apostolic Church as St. Hovhannes Imastaser (Wise). He is an author of numerous sharakans (psalms) which are sung at Armenian churches till now, and theological works. His «Book of Rules» was the first collection of Armenian Church law.

Srbanes Monastery also went down to history of world cinematograph as the place where a prominent film director Sergey Parajanov shot his famous «The Color of Pomegranates». 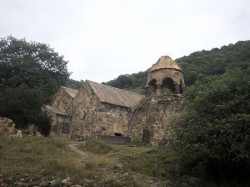