The location of Haghpat Monastery was chosen so that it overlooks the Debed River in northern Armenia's Lori region. It was built, not on a peak, but halfway up a hillside on a site chosen to afford protection and concealment from prying eyes and also in response to a kind of monastic humility. It is built on a verdant promontory located in the middle of a mountain cirque, which is often wreathed in clouds. A peak on the opposite side of the river is over 2,500 meters high. The monasteries of northern Armenia are not isolated, unlike their counterparts in the country's arid regions. They were built in a village environment and Haghpat is surrounded by many hamlets.

The largest church in the complex, the Cathedral of Surb Nishan, probably begun in 976, was completed in 991 by king Smbat. It is a typical example of tenth century Armenian architecture, its central dome rests on the four imposing pillars of the lateral walls. The outside walls are dotted with triangular recesses. A fresco in the apse depicts Christ Pantocrator. Its donor, the Armenian Prince Khutulukhaga, is depicted in the south transept (a transversal nave intersecting the main nave). The sons of the church's founder, Princes Smbat and Kurike, are shown with Queen Khosravanuysh in a bas-relief on the east gable. Apart from one or two minor restorations carried out in the eleventh and twelfth centuries, the church has retained its original character. 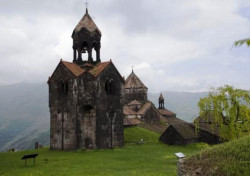