Jermuk is famous for its hot springs and mineral water brands bottled in the town. It is attractive for its fresh air, waterfall, artificial lakes, walking trails, the surrounding forests and mineral water pools. The town is being redeveloped to become a modern center of tourism and health services. It is also being set up to become a major chess centre, with numerous chess international tournaments scheduled in the town. As per the 2016 official estimate, Jermuk had a population of around 3,400. However, as of the 2011 census, the population of Jermuk was 5,572. The nearby villages of Herher (pop. 706), Karmrashen(pop. 252), and Gndevaz (pop. 829) are also part of the municipality (community) of Jermuk. Jermuk occupies an area which is historically considered as part of the Vayots Dzor canton of the Syunik province of Greater Armenia. It was first mentioned during the 13th century by historian Stepanos Orbelian in his work History of the Province of Sisakan. The remains of an ancient cyclopean fortress and the ruins of an 8th-century basilica testify that the region around the fountains of Jermuk has been settled long before the 13th century. The area of Jermuk has been ruled by the Siunia dynastybetween the 10th and 13th centuries, when Vayots Dzor was part of the Kingdom of Syunik. The princes of Syunik regarded the mineral springs of Jermuk as healing and built several pools filled with it, thereby making the little town their holiday destination. During the Middle Ages, the Silk Road passed through the area of Vayots Dzor, particularly the road that currently links the town of Martuni with Yeghegnadzor to the northwest of Jermuk. 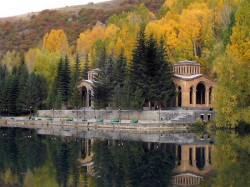