The monastery is sometimes called Noravank at Amaghu, with Amaghu being the name of a small and nowadays abandoned village above the canyon, in order to distinguish it from Bgheno-Noravank, near Goris. In the 13th–14th centuries the monastery became a residence of Syunik's bishops and, consequently. a major religious and, later, cultural center of Armenia closely connected with many of the local seats of learning, especially with Gladzor's famed university and library. Noravank was founded in 1205 by Bishop Hovhannes, a former abbot of Vahanavank near the present-day city of Kapan in Syunik. The monastic complex includes the church of S. Karapet, S. Grigor chapel with a vaulted hall, and the church of S. Astvatsatsin (Holy Mother of God). Ruins of various civil buildings and khachkars are found both inside and outside of the compound walls. Noravank was the residence of the Orbelian princes. The architect Siranes and the miniature painter and sculptor Momik worked here in the latter part of the thirteenth and early fourteenth century. 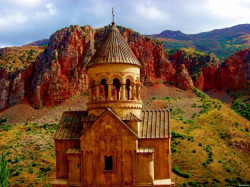