Travel all over the Armenia

Arrival at the Airport  Zvartnots , accommodation to the hotel  in Yerevan, have a rest.  After 2 hours have a city tour in Yerevan. Visit to History Museum of Armenia. It is  located on Republic Square, specializes in the fields of Archaeology, Numismatics and Ethnography.   You will visit also Megerian Carpet Factory here you welcome to watch the production of the rugs which involve dyeing of the yarns by using vegetable dyes, weaving, shearing, finishing, etc. At 14:00  you  welcome to have lunch in restaurant Caucasus. After having a rest in hotel , you can have a walking tour in Yerevan city. During this tour you can see  Mother Armenia statue at Victory park with an incredible overview of a city, Cascade , Opera , the Northern Avenue , Republic  Square. Return to the hotel . Overnight in Yerevan .

Breakfast at the  hotel . Preparing for tour . The first destination is  Garni, it’s the the only, survived pagan temple in Armenia devoted to the God of Sun Mihr. The ruins of the royal palace and the bathroom with a unique mosaic work can be found near the temple. The next destination is Geghard monastery, which is isted as UNESCO World Heritage Site.Geghard monastery is the unsurpassable masterpiece of the 13th century Armenian architecture. Some of the churches of the complex are masterfully hewn in a huge rock. 14:00 Time for lunch at the restaurant Geghard.Here you can taste Armenian bread Lavash. After lunch we  visit to the center of Armenian Apostolic church- St. Echmiadzin .The Cathedral of Echmiadzin was founded at the beginning of the forth century and is one of the oldest churches in the world. Return to Yerevan and stopover for Zvartnots temple, 7th century architectural masterpiece, listed among the UNESCO World Heritage Sites. Panoramic view of Mount Ararat and the ruins of Zvartnots create a breathtaking sight. Return to the hotel. Overnight in Yerevan.

Breakfast in hotel, check out from the hotel and start the tour. Today we discover the most popular pilgrimage site in Armenia Khor Virap. The Мonastery is famous for its location, especially for the view of the Biblical Mount Ararat, on the top of which Noah’s ark came to rest according to legend.The next stop will be Areni wine factory where you can taste Armenian red wine and buy them if you want.After that we’ll visit Noravank Monastery of XIII century .The monastery enshrined with fine architectural solutions and luxurious embellishments is one of the brightest examples of Armenian architecture. Noravank consists of St. Karapet, St. Grigory the Illuminator churches and St. Astvatsatsin (Holy Mother of God) two-storey church, which is notable for its ideal constructive and sculptural work.During this tour we’ll visit Shaqi Waterfall and Karahunj. Stonehenge( Karahunj) is the scientific expeditions proved to be one of the oldest observatories in the world. Some of the precisingly arranged huge stones have holes bored into them, which were used for astrological observations.Overnight in Goris .

Have a breakfast in hotel and check out.Today the first stop is Khndzoresk  . The Village stands out with its remarkable historical past. It took part in David Bek’s struggle for liberation. The village’s citadel used to be Mkhitar Sparapet’s (supreme commander of the armed forces) military base in 1728-1730. We’ll visit Tatev Monastery . Tatev Monastery, founded in the 9th century, is one of the most wonderful places of Armenia. Located on a large basalt plateauon the edge of a deep gorge of the Vorotan River,Tatev Monastery forms an incredible harmony with the picturesque landscape. Here you can see the longest reversible cableway in the world (5752 m), recorded in the Guinness Book of Records.After that visiting Devil Bridge  Devil’s bridge is located on Vorotan River to the east from Tatev village. There  are many mineral springs around, from which have formed wonderful stalactites. The next stop is Jermuk . It is a spa town, where much of the country's mineral water comes from. Overnight in Jermuk.

Visiting  Water Gallery, where hot mineral water of different temperatures comes out of pipes in the wall. Different temperatures are supposed to be good for treatment of different diseases. Jermuk waterfall that falls from a height of 70 meters into the gorge of river Arpa is a true miracle of Armenian Highlands.After relaxing in city Jermuk, we’ll drive to   Lake Sevan  on Selim Silk Road ,one of the greatest high mountainous freshwater lake. Here we’ll visit Sevanavank and Hayravank  Monasteries. After that drive to Dilijan.                          Overnight in Dilijan.

In the morning have a breakfast in hotel .After that check out and start excursion to Tufenkian’s old Dilijan complex.Dilijan was known as a blossoming center of culture, commerce and cuisine. In order to enjoy the region’s picturesque landscape, wealthy vacationers from Tbilisi, Baku and beyond, flocked to Dilijan in increasing numbers, paving way for the town’s international culture.Today we’ll visit also Goshavank and Haghartsin Monasteries. The evening you can spend in Parz Lake which is located in the Dilijan National Park .Then we’ll back to Dilijan .

We’ll start to exploring the Alaverdi.Here we visit Sanahin monastic complex (10th c.), which was a religious, cultural and an educational center in the X-XIII centuries and was later included in the UNESCO's World Heritage List. A trip to Haghpat Monastery (10th c.), a UNESCO World Heritage Site. The complex includes St. Nshan, St.Grigor, St. Astvatsatsin churches, gavit, Hamazasp's chapel, manuscript center, belfry, dining hall, sepulchre-chapels and splendid khachkars of the 11th-13th centuries.Vanadzor is the administrative center (Mets Gharaqilisa, Kirovakan). Nowadays Vanadzor is one of the biggest industrial, educational, scientific, health and cultural centers of Armenia. Overnight in Vanadzor.

Armenian Alphabet Monument is located in the village of Artashavan, at the east side bottom of Mt. Aragats. The monument is an interesting demonstration of the stone carvings of 39 Armenian letters. The Armenian alphabet has been used to write the Armenian language since the year 405 or 406 and is still used to present Armenian language in written form. It was devised by Saint Mesrop Mashtots, an Armenian linguist and ecclesiastical leader, in order to make the Bible accessible to Armenians and spread Christianity. The next stop will be Amberd, Saghmosavank after that Hovhannavank . The principal architectural features of medieval fortress-building have found their reflection in this fortress.  Having been built on a naturally well-defended cape, Amberd has for long time served as an important military fort.Saghmosavank .Saghmosavank  monastery built on the edge of Kasakh river canyon, in the 13th century Vachutian dukes built Saghmosavank monastery. Hovhannavank monastery bears the name of John the Baptist. The oldest church here is the one-naved basilica built in the 5th century. In the 13th century under the patronage of Vachutian dukes new buildings were added. And back to Yerevan . After having a rest in hotel, you can spend your   free time in Old Yerevan Restaurant, where you can taste national dishes , and listen Armenian traditional music.

Breakfast in  Hotel. After that we are pleased to invite you to get acquainted with the history of brandy making in Armenia, follow its production phases and enjoy the delicious taste and flavor of different kinds of ARARAT brandies just from the first hand. Visit the museum of the factory, get acquainted with the legends of ARARAT brandies, learn the 120 years old history of Armenian brandy production. Walk around the ageing cellar and see how the brandy spirits are preserved and  taste the delicious brandies.  In Yerevan you can visit Vernissage art market, where you can buy handicraft and art works.It is the right place to get little taste of Armenia and a special spot to witness the fusion between national traditions and modern taste.Check out of  the Hotel and transfer to the airport.Departure. 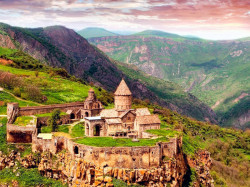